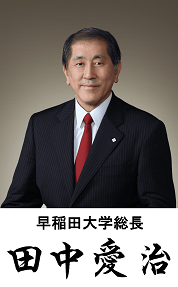 Envisioning a Waseda that shines on the world stage


Waseda University has long been supported by donations from its many graduates and benefactors. Ever since our founding in 1882, we have sent many able graduates out into the world and built a brilliant history and tradition extending right up to the present. This would not have been possible at all without the support of these donors, to whom I would once again like to express our gratitude.

In 2012, we at Waseda University formulated Waseda Vision 150, our medium- to-long-term plan looking to our 150th founding anniversary in 2032. Waseda Vision 150 has been given high ratings both inside and outside of Japan, and we are now preparing the Next Stage, a new grand design to further uphold this plan. In this connection, we are going to clearly define priorities and unstintingly expend effort on the following three initiatives, which we consider particularly important. Firstly, we are going to do our utmost to recruit first-rate faculty members from around the world to further improve the level of research and education at the university. We likewise intend to provide opportunities for our students to study overseas and thereby produce global leaders with formidable intelligence and a lithe sensibility. Secondly, toward the goal of a Waseda that shines on the world stage, we are going to proactively deploy publicity campaigns targeting the rest of the world so that we can disseminate a wide range of information about our university, from research, education to history. And thirdly, we intend to take action to further solidify our financial foundation. More specifically, besides augmenting our donation system centered on the Waseda Supporters Club, we plan to also look overseas and examine new ways of soliciting donations by studying cases of success in other countries.

In recent years, the business environment surrounding private universities in Japan has become extremely harsh, partly due to factors such as the decline in the population of 18-year-olds. Precisely because of this situation, it is vital for us to rekindle the spirit of progressivism we embraced during our founding. We also need to promote a sharing of values by Waseda graduates, parents, students, faculty members, staff, and all others concerned, and proceed together toward the same goal through an all-Waseda effort.

We would appreciate your continued help and support as we work to achieve even more progress for Waseda University.